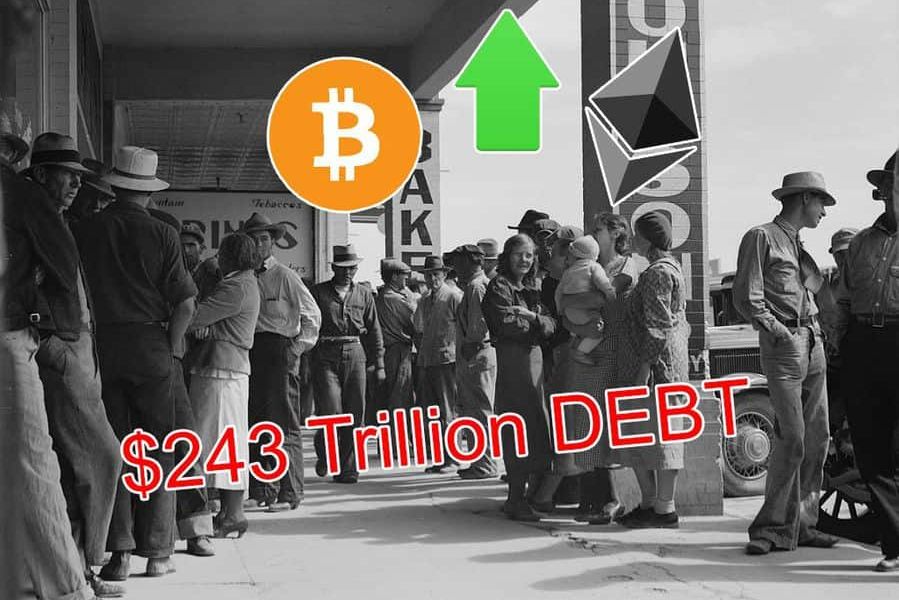 Global debt is increasing, economic uncertainty is being fuelled by the American trade war with China, confusion and delays of Brexit and many economists predicting a coming recession- Could these be the reasons that Bitcoin and Crypto markets are currently booming?

In a report published on the 2nd April by the Institute of International Finance, found that current total global debt stands at $243 Trillion and rose by $3.3 trillion last year. The total global debt is more than three times that of the GDP (Gross Domestic Product).

Total debt in the U.S. grew by $2.9 trillion to more than $68 trillion in the largest annual increase since 2007. The most worrying indicator is that U.S. nonfinancial corporate debt stands at 73 percent of GDP, close to its peak before the financial crisis.

If you look at the current rally of the S&P 500 you might all is going well with the US economy. Since low in December 2018 the S&P has soared 23%, however, in a recent Bloomberg poll of 24 economic strategists predicted that the S&P will only increase another 4% in 2019.

In addition to the poor stock predictions, commodities such as diamonds have been constantly falling in price. The average price for a top 25 quality, 1 carat diamond has dropped 45% since 2011, according to the Rapaport Diamond Trade Index. Moreover, the price of gold has fallen 32% since 2011.

As the world economy continues to head towards another financial crisis caused by massive amounts of debt people are looking for a better alternative. One of the major catalysts for the impending debt crisis is Fractional Reserve Banking.

Fractional reserve banking is a banking system in which only a fraction of bank deposits are backed by actual cash on hand and are available for withdrawal. This is done to expand the economy by freeing up capital that can be loaned out to other parties. Thus, banks are literally printing their own money.

This practice adds to the inflationary pressure on fiat currencies. Over the past 160 years the US dollar has continued to fall in value.  $1 in 1860 is equivalent in purchasing power to $30 in 2019. In addition to this, since the financial crisis most western countries used quantitative easing to prop up their economies. This is the process of central banks printing money and buying debt to increase money supply.

Bitcoin is essentially different. Bitcoin is deflationary in nature as it has a fixed supply. Once all the Bitcoin is mined, that’s it there will only ever be 21 million Bitcoins. Consequently, Bitcoin will only go up in value. Banks use money and debt to make more money for themselves. With crypto people no longer need banks they are free to transact value peer-to-peer.

For the past couple of days many people have been scratching their heads and wondering why now? At the time of writing Bitcoin jumped 24% since Tuesday’s pump. Consequently, other alt coins also rallied such as BCH which has gone up 99%, LTC 61%, ADA 38%, and ETH 33%.

As fundamentals continue to increase and financial giants such as Fidelity have launched custodial products for institutional investors; perhaps traditional financial institutions are now turning to Bitcoin and other digital assets to find gains and safe harbour in these turbulent times?