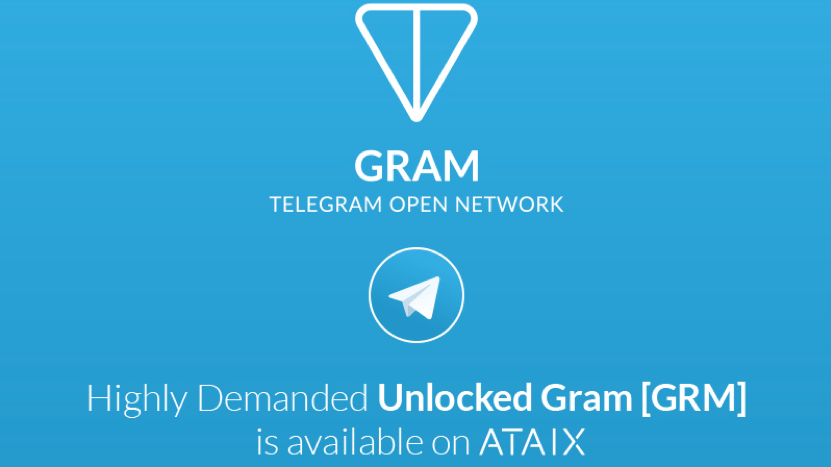 The ATAIX exchange has announced that it will be the first to sell the native currency of the Telegram Open Network (TON), Gram [GRM. Initially bought by investors during Telegram’s astounding $1.7 billion ICO last year, Gram is one of the most widely talked tokens that have yet to hit the market. ATAIX’s Gram sale will be the earliest opportunity for individual investors to buy Grams, which can then be traded immediately after the launch of TON and the release of tokens by the issuer.

Telegram is quickly becoming one of the most popular messaging and communications platforms available, recently surpassing a membership of over two hundred million users worldwide. The Gram token will be accessible through a wallet built directly into TON, meaning its users will require little-to-no prior knowledge of cryptocurrency in order to send and receive it.

Due to the likelihood of high demand, a series of Gram sales may be conducted in waves, with each wave offering a higher price per Gram. The current price of Gram can be found at ataix.com/gram.

In order to participatein sales, purchasers must open an account on ATAIX and perform a mandatory KYC procedure. Trading of Gram will be subject to terms published on ATAIX.

Gram will be sold for Tether [USDT], which is a stablecoin pegged to the US dollar. USDT may be obtained by purchasing it on an exchange, using EUR, BTC, ETH, and more than 20 other cryptocurrencies. USDT can also be purchased on ATAIX directly using BTC, ETH, XMR, DASH, BCH, XRP, as well as some other major altcoins.

About the Telegram Open Network

The Telegram Open Network (TON) is designed by Telegram co-founder Dr. Nikolai Durov and is developed with speed, efficiency, and security in mind. It is also the first application of its type to store its data on a highly-scalable blockchain network which is capable of handling millions of transactions per second. With a remarkably streamlined user interface, TON aims to be friendly to both users and service providers. Its blockchain-based network is specifically designed to host and provide a variety of services built by Telegram as well as other developers and publishers. According to Telegram, TON can best be described as a huge, distributed supercomputer.

The Gram [GRM] token is the native cryptocurrency of the TON blockchain. It will serve as a utility token and be used chiefly within the TON economy as the primary means of payment for its products and services. Gram is well-positioned to become one of the most successful and widely used cryptocurrencies to date, as it will be utilized by Telegram’s massive community and further supported by an up-and-coming TON economy. It has the distinct advantage over other utility tokens of being backed by a working product that is already tremendously popular and successful. Its technical development was inspired by both Bitcoin and Ethereum. The total supply of Grams will be limited to 5 billion.

Telegram is a cloud-based messaging app and desktop platform that is focused on being faster and more secure than its competitors. It has over two hundred million registered users, with over 70 billion messages sent each day.

ATAIX is an EU-based digital asset and cryptocurrency exchange that allows users to trade easily and store their cryptocurrencies, tokens and fiat currencies in a safe, user-friendly, and fast platform.