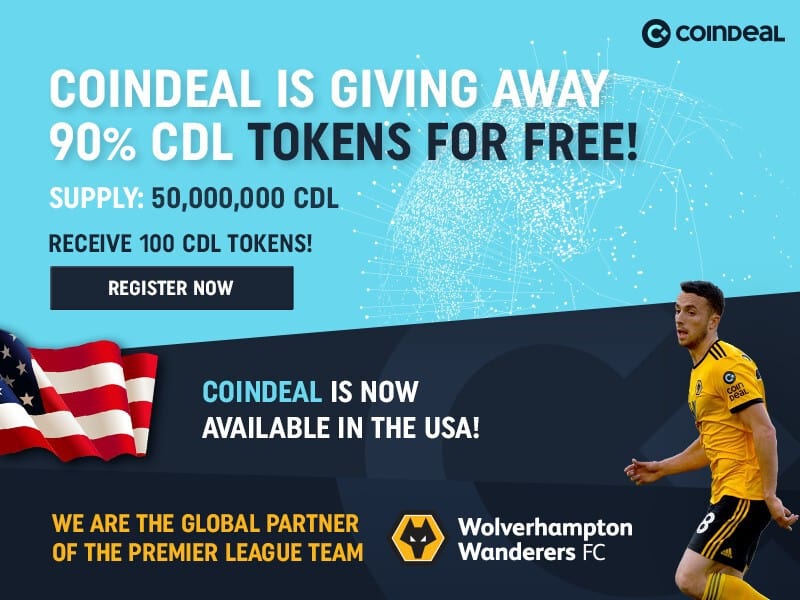 The CoinDeal cryptocurrency exchange platform continues to grow in both user base and popularity. Part of CoinDeal’s wide public exposure stems from the exchange’s Premier League sponsorship – which has just been renewed for another season. What’s more, the exchange is soon about to expand to a number of states in the United States. As such, the crypto exchange is preparing to celebrate with a unique giveaway of its own ”CDL” CoinDeal token.

The CDL token offered in this upcoming giveaway will feature extensive integration with the CoinDeal exchange. Moreover, the token will reportedly ”allow for a higher liquidity within CoinDeal and for more pairing with cryptocurrencies and fiats”.

Unlike most token giveaway programs, which offer around 5-7% of the tokens to users via bounty programs, the CoinDeal giveaway will see 90% of all generated tokens given to users. As such, this massive giveaway approach has been described as ”unprecedented”.

Furthermore, CoinDeal has said that it will launch a variety of crypto and fiat pairings following the token giveaway. The total token supply is said to be 50,000,000 and the tokens are created on the EOS blockchain. As a result, CoinDeal notes that they will feature swift transaction times, as well as drastically lower network fees than ERC20 tokens.

The first 450,000 users to partake in the giveaway will receive CDL tokens. Specifically, the giveaway is principally addressed at CoinDeal’s existing 300,000 users, along with 150,000 new users.

Alex Strzesniewski, the Business Development Director at CoinDeal, describes the CDL token as a central part of the CoinDeal experience moving forward:

”The CDL token will be the backbone of CoinDeal and that’s why we want to give it to our users for free – these tokens are meant to be used. We didn’t want to create something that has no value and try to make money off of it, like you’ve seen with many ICOs.”

How to get CDL tokens?

Those interested in taking part in this token giveaway only need to register on CoinDeal. Following this, they need to go through CoinDeal’s verification process. Then, they are free to submit their interest to ”Get Free Tokens” and the tokens should then appear in their wallet.

However, those interested in the CDL token should make sure to act fast, seeing as the number of tokens is capped.

Those receiving CDL tokens will reportedly have numerous advantages to look forward to. For example, CDL tokens are said to come with decreased trading fees, as well as customer support/fast pass priority.

Additionally, the CDL tokens’ multi-tier token staking system will reportedly be able to decrease fees to 0.00%. The CDL tokens will also give access to ”advanced trading features”, as well as access to CoinDeal’s upcoming social trading platform, which is slated for release in 2020.

In addition to this, users will be able to get even more out of this discount – through sending referral links to friends. This referral link will also allow the referrer to receive 20% of the referred users’ trading fees.

The 2018/2019 season saw CoinDeal team up with the Premier League team Wolverhampton Wanderers (commonly referred to as ”Wolves”). This fruitful cooperation has been described by CoinDeal as ”one of the biggest and most important marketing adventures” in the company’s history.

Now, CoinDeal and Wolverhampton Wanderers can announce that their partnership has been extended for the upcoming 2019/2020 season as well. According to CoinDeal, the media value for the exposure given through the partnership with Wolves amounts to a massive £50 million for the June 2018 to April 2019 period.

The partnership has seen the CoinDeal logo showcased on TV screens all over the world more than 350 million times. The official CoinDeal advertisement with Wolves players has similarly gained more than 1 million views on YouTube. One of the company’s founders, Kajetan Mackowiak, elaborated on the partnership:

”There’s nothing better than game day in Wolverhampton – we try to be there as often as we can, regardless, we always make sure to cheer on and follow all games even in the office.”

Seeing as the CoinDeal – Wolverhampton Wanderers partnership has grown beyond a mere sponsorship, CoinDeal is understandably excited that the collaboration has been extended for the upcoming season.

CoinDeal expands to the US

Furthermore, CoinDeal is about to expand its operations to the US. Although CoinDeal is already one of the largest crypto-fiat exchanges in Europe, the company is now about to enter the American market.

CoinDeal describes their entry to this massive market as a ”huge opportunity”, as more than 40% of the American population is reportedly open to cryptocurrency. What’s more, CoinDeal notes that the current selection of crypto exchanges available in the US do not always meet customers high expectations.

Following this, another 12 states will supposedly follow in a second phase of the US rollout. CoinDeal is currently ”actively pursuing all necessary licenses” and expects to be available in more than 40 states, with a USD pairing, by 2020.