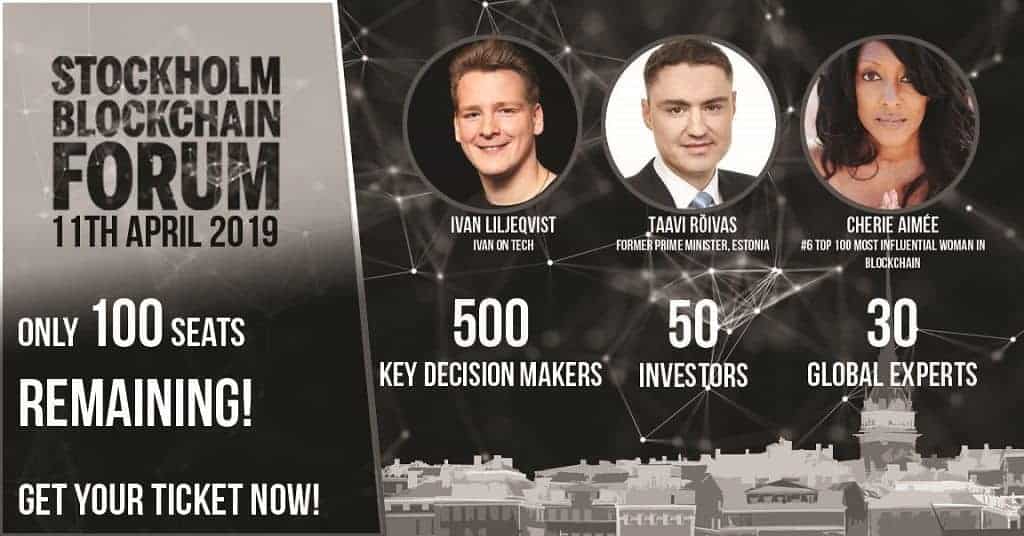 Sweden and the Nordics home to an innovative start-up environment and a strong blockchain and crypto community. The Stockholm Blockchain Forum taking place on April 11th has announced a stellar show in April and have now confirmed that the Former Prime Minister of Estonia, Taavi Rõivas, will speak at the conference.

The Stockholm Blockchain Forum have now confirmed the Former Prime Minister of Estonia, Taavi Rõivas, to form part of their regulatory panel. Estonia is one of the most technically advanced countries in the world, and have been praised for innovations such as the e-residence and the high level of digital integration of public services.

The speaker line-up also includes prominent names such as Ivan Liljeqvist, world-famous YouTuber under the name Ivan on Tech; Cherie Aimée, ranked as the sixth most influential woman in blockchain across the globe; Jimmy Zhao, Co-Founder and CMO at ZBX exchange; Christian Ander, the Founder of BTCX and the initiator of the Swedish Riksbank digital currency project E-krona; Henrik Hjelte, Co-Founder at ChromaWay which is collaborating with the Swedish government to put property ownership registries on a blockchain; Vahid Toosi, Co-Founder of EOS SW/EDEN; Mikael Wintzell, Co-Founder and CEO at Wellstreet; Shahjahan Yousuff Khan, CEO at Tokenine; Toni Nijm, CSO at CPA Global; Dr Guenther Dobrauz, Partner and Leader at PwC Legal Switzerland; as well as Frank Schuil at Safello, Sebastian Markowsky at GP Bullhound, On Yavin at Cointelligence, and Raoul Stubbe at Single Technologies among others.

The agenda of the one-day conference features the topics Regulation, DAOs and Decentralized Governance, Banking and Blockchain, Centralised vs Decentralized Exchanges, Investing in Blockchain, Blockchain Applied to Business as well as a number of Thought Leader interviews. Companies are also welcome to present their own case study of a successful blockchain implementation during a one-hour session. The eve before the event is cordially inaugurated with a sponsored C-level dinner organised by the strategic partner Malta AI & Blockchain Summit.

Delegates are suggested to reserve their seats quickly as the organisers are running out of available tickets with less than 100 seats remaining. Ticket prices are set to doubly by the first of March. The conference is sharing its expo floor with four other conferences and exhibitors can benefit from hundreds of key decision makers under one roof. The Stockholm Blockchain Forum is a must-go for anyone who wish to dive deeper into the actual use cases of blockchain and network with C-Suite professionals as well as some of the most innovative start-ups in the field.

USE THIS 50% DISCOUNT CODE: “SBFTOSHITIMES50”