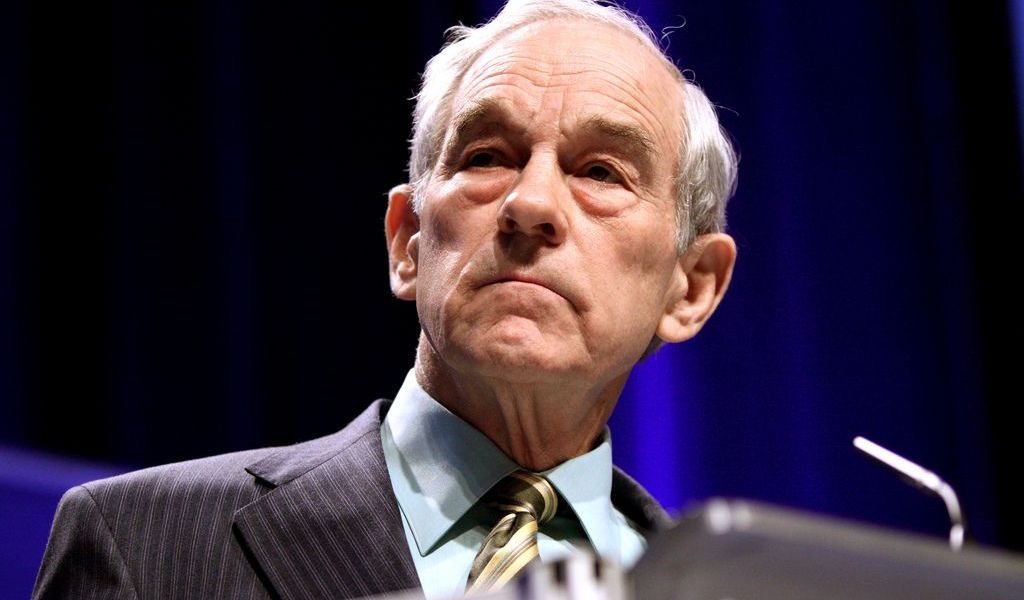 Once-upon-a-time presidential hopeful and US Representative, Ron Paul has authored an essay which indicts the direction of the US economy and its interest groups and calls for competition with the dollar from crypto and gold-backed currencies.

Ron Paul’s latest publication is bound to spark debate; he wants the gold standard back, this time with crypto for backup. His essay appeared on the website for the Mises Institute, an academic organization which describes itself as promoting ‘Austrian Economics, Freedom and Peace’.

Paul, who ran for president 3 times under the Libertarian Party, is a known for progressive politics; he is an opponent of US fiscal policy as well as the mass-surveillance programmes which came to light after the Snowden leak.

Paul begins his text with the bold statement that, “It’s a fallacy to believe the US has a free market economy.” He describes the US economy as being run by a conglomerate of parties in and out of the government which distort it to suit their interests.

The Fed, The Treasury, The SEC and The CFTC are named as the four big US institutions which are acting together not to help the ordinary citizen, but keep any sort of crisis from breaking out on Wall Street. Paul goes on to say that the US authorities sought to demonetize precious metals like gold throughout the 20th Century so that the value of the dollar as fiat could be fully controlled by interest groups.

He breaks down many of the systems by which the US financial system measures its success, arguing that these metrics and measures make no sense when one is assessing the real strength of an economy.

“Official government reports inevitably claim inflation is low and we must work harder to increase it, claiming price increases somehow mystically indicate economic growth … The Consumer Price Index is the statistic manipulated to try to prove this point just as they use misleading GDP numbers to do the same … Anybody who pays the bills to maintain a household knows the truth about inflation.”

However, he envisions an escape from this “fake” system through a reinstatement of a gold standard type system for the 21st Century in which cryptocurrencies and gold would be able to coexist in a single monetary system.

“It’s conceivable that cryptocurrencies, using blockchain technology, and a gold standard could exist together … A combination of gold and crypto will prove to be a lot more achievable than getting people to adapt to a totally new concept of money.”

Breaking down how the two asset classes might work together, Paul writes:

“Retail trade, under primitive conditions associated with a currency crisis, will lend itself to using tangible precious metals in preference to a digital cryptocurrency requiring active networks. Large transactions, at greater distances, may best be served by a proven and trusted cryptocurrency however.”

But as to when we might see this novel system entering into play, Paul asserts that there are initiatives already underway, with many individuals buying up gold reserves.

Ron Paul’s assertion follows a thread he has maintained throughout his career. Whilst it remains admirable and noble that he should stand up for such seemingly radical positions, as well as the plight of the ordinary citizen, it is hard to conceive of his dualist system being implemented. The gold standard has been so successfully discredited by history that it is a topic unlikely even to be heard out by most in this day and age.

It is doubtless that the current system is sooner or later heading for a fall: debt-fuelled economies all over the world can’t go on indefinitely. But it is hard to believe that a return to the gold standard is what will remedy it. It does not offer the flexibility of the economy which seems to be required the more technology develops. Arguably, crypto can do all the things gold did and more. Sure, a few kinks need to be ironed out (volatility, lost assets through mistake transactions) but that will come with time and development of the technology. Gold has been tried notably 2 times in recent history. Is this a case of third time lucky? Somehow it’s doubtful.