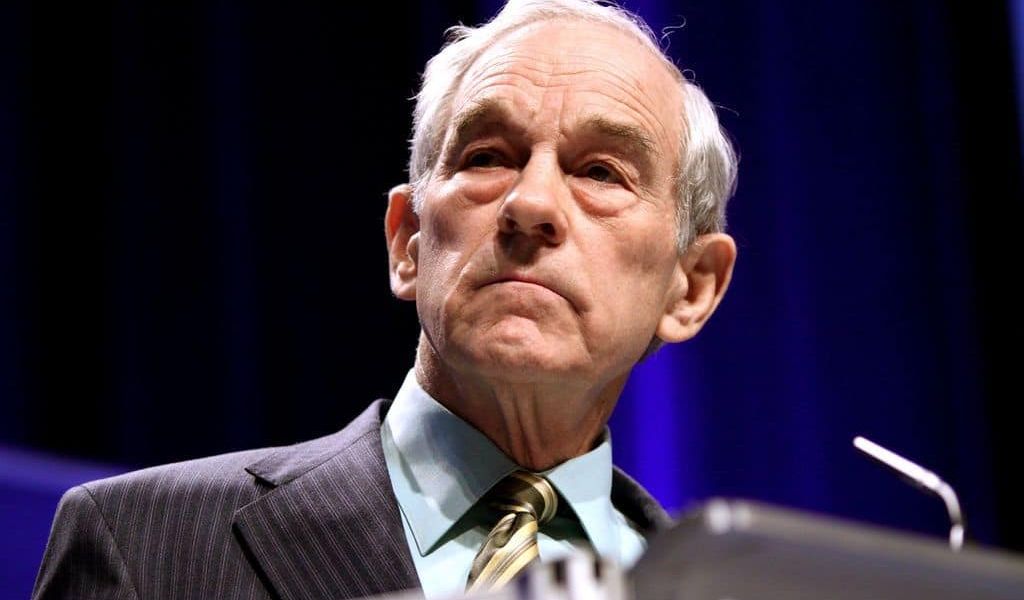 Ron Paul, long-standing crypto advocate has once again called for the abolition of the Federal Reserve, after it raised the baseline interest rate 0.25%, bringing it to 2.5%.

Ron Paul has been advocating the ills of a fiat economy for some time. His main gripe with it is that without proper backing form commodities, the fiat system is heading for inevitable depreciation into worthlessness. That’s why he advocates pursuing a mixed economy of cryptocurrencies and currencies backed by precious metals. With currencies actually backed up by something, they will hold their value and we won’t be headed for implosion under a mountain of national debt.

Paul tweeted angrily on Wednesday (December 19th) about the Fed’s decision to raise interest rates for the fourth consecutive time in 2018. The rise of 0.25% took the interest rate to 2.5%. On the matter, Paul said, “The Fed has NO IDEA what rates should be,” and that, “The Fed manipulates prices, distorts the economy, and makes decisions by looking at the ‘data’ of a distorted economy.”

The Fed has NO IDEA what rates should be.

The Fed manipulates prices, distorts the economy, and makes decisions by looking at the "data" of a distorted economy.

America needs to get back to reality.

Paul sees the Fed as an institution of central planning in the economy and accuses it of producing a “world of delusions”. Central planning was of course a core tenant of the Soviet-style command economies which ran – and failed – using centrally dictated guidance from politicians. Whilst the Fed is theoretically less political than communist economies of the past, it is nevertheless an institution which does distort the pure nature of the market.

In his tweet, Paul is photographed holding up a copy of his book entitled “End the Fed”, which was first published in 2009. The book, which was first released in the wake of the American subprime crisis, makes the argument that the Fed is “irresponsible, ineffective and unconstitutional” for its methods which it uses to keep the dollar afloat.

In Paul’s view, the Fed is running on the same playbook as the Weimar Republic in interwar Germany, or Zimbabwe. Both of these countries suffered under the extreme effects of hyperinflation, which is also currently happening in Venezuela. Paul believes the dollar on its current trajectory is heading for an inflationary depression, which will leave it worthless. Since the dollar is the world’s reserve currency, this would be disastrous for the global economy.

From Sceptic to Advocate

Paul has long advocated a switch back to a commodity-backed currency like the gold standard, which ended in 1971. However, when he first encountered bitcoin, he was sceptical.

A wealthy person wants to gift you $10,000. You get to choose in which form you'll take the gift. But there's a catch: You must keep the gift in the form that you choose, and you can't touch it for 10 years.

In which form would you take the gift?

“Bitcoin is very exciting…but [investors] don’t have a long-term perspective,” he said in December 2017, following the results of a twitter survey he set up, asking people what they would do with $10,000 if they received it today. Clearly to his surprise, more people said they would invest in bitcoin than gold.

“What’s [bitcoin] going to be like in 10 years? Nobody knows. But we have a pretty good idea of where gold will be, in a general sense.”

He has since got fully behind crypto and is now known as one of its staunchest advocates from American politics, seeing a coexistence for gold and crypto in future.

It is difficult to know if Paul is correct. Bitcoin is often dubbed digital gold and could offer a solution through its utility and mobility that gold inherently lacks. I can move a bitcoin far easier than I can a gold bar. However, we must remember the gold standard failed. It comes with a rigidity of value that makes it difficult for dynamic economies to reach their full potential. On the other hand, rising national debt cannot go on forever and will one day come to bite us. My advice? (Obviously not actual financial advice) Spread your portfolio and get a bit of everything.