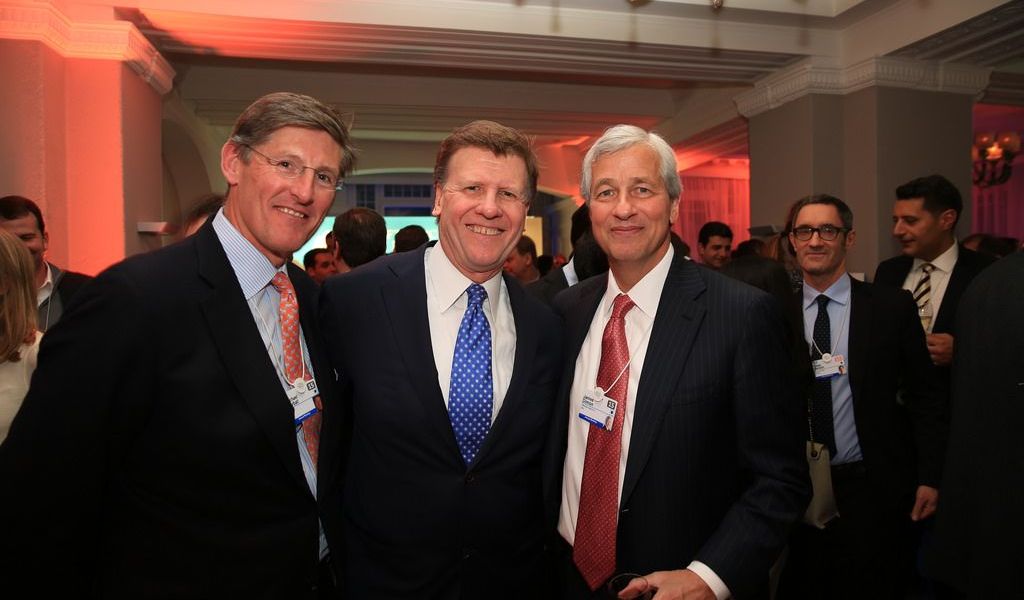 Jamie Dimon of JP Morgan Chase famously labelled bitcoin as a scam in September 2017. Later it turned out JP Morgan is buying crypto. In a disruptive market, the wealthy know how to play their hand to make sure all the cards stay with them; it has been this way since time immemorial. Cryptocurrency is the latest market in which this is happening. Let’s take a look at how they do it.

Taken a look at a bitcoin chart recently? The number of drops and spikes in price movement stand out cliffs in a landscape over which countless sweaty palms have hovered whilst they contemplated hitting that “sell” or “buy” button as the bitcoin price yo-yoed. This morning (October 15th) the bitcoin price rocketed upwards by almost $800 in less than 20 minutes as collectively we asked, “what is going on here?!”

These are the movements of “Whales”, big players in the market which buy and sell bitcoin in quantities you and I can only dream of; quantities so big, that when they move them, the market shakes and you get spooked by the movement. They know this, and use it to their benefit.

You see, it’s part of a larger market force commonly referred to in the cryptoverse as “Fear, Uncertainty and Doubt” (FUD) and successful deployment of it as a disinformation strategy can be used to great effect by large institutions. Price manipulation and insider trading is illegal, but media manipulation is often used as a backdoor to achieve the same end. The general thinking: label a product as junk and if enough investors can be successfully spooked enough to sell their positions, big institutions can move in and clean up during a sell-off. In a nutshell: “create fear in order to get cheap prices”.

Indeed after 10 months of a bear market that has turned into a total Apocalypse and Meltdown – typical shitcoin down 95% and other major "coins" down 80% – they are a pack of rabid angry hungry desperate mean violent wolves https://t.co/vLzJsvKUVs

It is a well-used blueprint: in the late 1990s, during the bear market at the time, investors were drip-fed a sentiment that their tech stocks were junk by many institutions. Many investors, taken in by the FUD sold off stocks in Apple, AOL, Microsoft and others which later boomed – after institutions had bought up these sold-off stocks and pumped a trillion dollars into the market between 1995 and 2000.

The same happened in the UK in 1992 when, in an exemplary use of FUD creation for personal advantage, George Soros shorted the vulnerable British Pound. Spooked by Soros’ actions a mass sell-off ensued causing the Pound to plummet. Soros then proceeded to buy up vast amounts of the tanking British currency, making himself $1 billion in the process.

And it has been happening with cryptocurrency for the last year. Two distinct sides emerge in the debate; those who “believe” in bitcoin and those who label it as a scam. Jamie Dimon, Warren Buffett and Peter Schiff all come to mind as people who have dismissed bitcoin outright. Whilst no-one knows what the future holds for any new asset, the aggression with which some rail against it should sound some alarm bells in your head; what do they have to lose?

Well, perhaps it’s more about what they see they can gain. These people are professional investors and there is no way they got to the positions they are in without appreciating the role of FUD in the market. Disinformation is part of the key to any good deal.

And this is going on before our eyes. The weekend following Jamie Dimon’s statement – which caused the bitcoin price to drop more than 20% – JP Morgan Chase bought the dip in the form of a huge stock of Bitcoin ETNs. George Soros similarly, after calling bitcoin a bubble in January, bought into crypto in April at a considerably reduced price. Goldman Sachs is another example, which after saying most crypto will go to zero, announced they were opening a crypto trading desk with $400 million capital behind it.

So what is the takeaway here? Stay calm, definitely. But more importantly we should look more at what influencers do rather than say. Despite all the FUD out there, the big hedge fund managers of Wall Street are buying into bitcoin. Hundreds of millions of dollars are flowing into projects which trade cryptocurrencies. The figures at the tops of these firms are experts in their field, with companies and bottom lines to protect: they wouldn’t buy it if they didn’t believe in it.