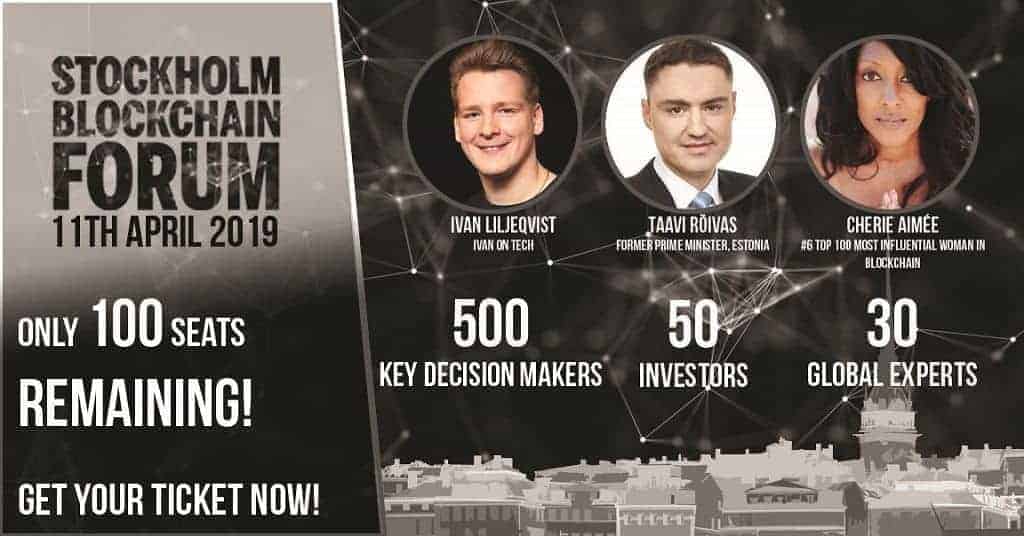 The Stockholm Blockchain Forum taking place on April 11th has announced a stellar show in April with the headlining speakers Ivan Liljeqvist, Taavi Rõivas Cherie Aimee. Exhibitors include AE, Caledo, Friend, CryptoSalary ShellPay. The seats for the conference is now almost sold out.

The speaker line-up includes prominent names such as Ivan Liljeqvist, world-famous YouTuber under the name Ivan on Tech; Taavi Rõivas, Former Prime Minister of Estonia; and Cherie Aimée, ranked as the sixth most influential woman in blockchain across the globe.

The agenda of the one-day conference features the topics Regulation, DAOs and Decentralized Governance, Banking and Blockchain, Centralised vs Decentralized Exchanges, Banking Today and the Future Token Economy, a comprehensive Q&A session where the audience can engage experts on stage for any queries on blockchain use cases, as well as a number of Thought Leader interviews.

Delegates are suggested to reserve their seats quickly as the organisers are running out of available tickets with less than 50 seats remaining. The conference is sharing its expo floor with four other conferences and exhibitors can benefit from hundreds of key decision makers under one roof. The forum is sponsored by the exhibitors AE, Caledo, Friend, CryptoSalary and ShellPay. The Stockholm Blockchain Forum is a must-go for anyone who wish to dive deeper into the actual use cases of blockchain and network with C-Suite professionals as well as some of the most innovative start-ups in the field.