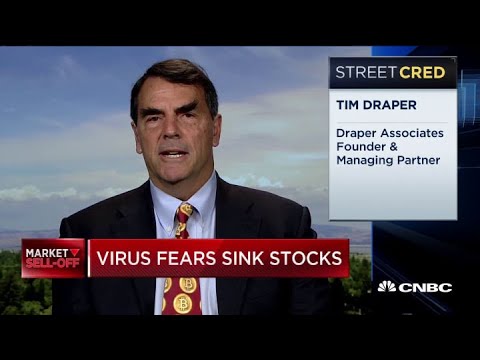 The billionaire venture capitalist Tim Draper is known to be a major Bitcoin bull. Now, however, it would appear that Draper has put his money where his mouth is. Specifically, he suggests that he has now quit stocks for Bitcoin.

Appearing on CNBC’s Squawk Alley in his iconic Bitcoin tie, Draper was bullish on the performance of Bitcoin. This came after a few weeks of bullish Bitcoin signals, with some even suggesting an impending $100,000 Bitcoin bull run. Draper is known to strongly believe Bitcoin will surpass fiat.

However, the last few days have seen Bitcoin trade somewhat down. At the time of writing, the price of Bitcoin is trading at $9,410. Nonetheless, Draper is not worrying over this temporary market blip. In fact, Draper even said that he had quit stocks for Bitcoin:

“Actually, I’ve got to admit, I have been out of the market for about six months. It felt pretty lofty for me, and I kind of moved most of my stuff to crypto and Bitcoin, it’s… I think that’s kind of a safe haven now. And I think that this correction may end up being more than that, but I think we are in for a kind of interesting ride.”

This decision will likely be something that Draper appreciates now, as the market is down due to the coronavirus. Additionally, Bitcoin and the crypto sector is up significantly from the end of 2019.

Draper also said that he left the public stock market due to some characteristics that were worrying him. Although Draper did not comment on the interviewer’s question regarding the dramatic rise of Tesla stock, he was cautious commenting:

“Well, it just got very frothy, the market got too excited. Uber drivers were, were doing day trading and, you know, all the signs were there, so I think it was time.”

However, Draper states that his VC firm, Draper Associates, is still active in private markets. As such, it’s clear that although Draper may have quit stocks for Bitcoin, his company still lingers in traditional markets. Nevertheless, he only believes “private” traditional markets are still worth it:

Draper holds ”a lot” of his net worth specifically in Bitcoin

The CNBC interviewers were also curious as to what price point Draper foresees Bitcoin surging to. Cryptocurrency fans will know of Draper’s extraordinary $250,000 Bitcoin price target, but it seems the CNBC team did not:

“Well, I’m still holding to my prediction that Bitcoin in 2022, or at the beginning of 2023, will hit $250,000. And that is a big move from where it is here, and I think that the reason there is that Bitcoin will be the currency of choice.”

Moreover, one interviewer pointed out that a $250,000 Bitcoin price is a roughly 25x increase over the current price. As such, the CNBC interviewers began inquiring what percentage of his net worth Draper had in Bitcoin. Laughing, Draper said he never tells anyone such specifics – but said it was “a lot”.

“It is A LOT. It is a lot a lot. I’m just a believer, and I look and I say, ‘Hey, this is just better’. Long term, people move to things that are better. What merchant is going to want to pay their 2.5% to 4% to the banks and credit card companies. They’re not going to want to do that forever.”