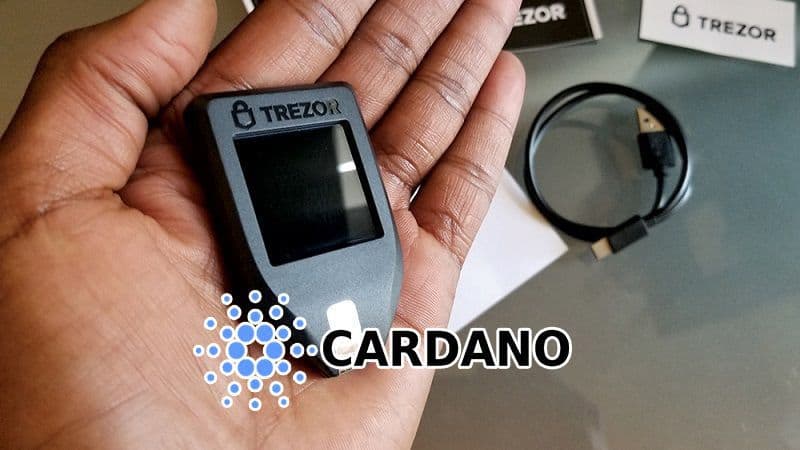 Charles stresses the importance of Cardano’s update, as one that reflects ‘resiliency’ and autonomy in developing features without direction from IOHK. was 100% responsible for developing the Trezor wallet integration.

is one of three organizations actively developing Cardano ADA, including The Cardano Foundation and IOHK.

Updates are big news for cryptocurrencies as they can affect price action and community adoption. This integration news update adds value and boosts confidence for the Cardano ADA community on a number of levels.

One of the top requests made by the Cardano community is for Ledger wallet support, which is to come in January after Cardano’s next firmware update to 1.5. Trezor and Ledger hardware wallets are among the most trusted cryptocurrency cold storage providers at this time.

Hoskinson expects additional support for Cardano ADA moving out of Q1 in 2019. He claims that efforts to gain Cardano wallet integration and adoption may be easier than in 2018.

Crypto storage best practices are to hold the keys to your cryptocurrencies, and the best way to do that is with a hardware wallet.  Especially when compared to holding cryptocurrencies on an exchange or software wallet, neither of which is considered safe.

On another note, assumptions are dangerous and wallets are not always secure, as yesterday reports surfaced that both ‘Trezor and Ledger are hackable.’ These allegations are being responded to, but it’s best to take note.

In November 2017, a 15-year-old named Saleem Rashid hacked Ledger’s wallet and blogged about it he titled, ‘Breaking the Ledger Security Model.’

Additional Cardano Updates To Expect Over The Next Few Quarters

Charles reviewed a number of coming updates to the Cardano platform, on top of what can be found on Cardano’s Roadmap.

Join The Cardano General Telegram Group and Avoid Cardano Community Group, Which Is ‘Full Of Trolls’

Charles invites people to join Cardano’s online community and ask questions to moderators and dedicated technical support. The best way to contact them is through their official Telegram group, Cardano General.

Avoid ‘Cardano Community’ Charles stresses, as this group is not affiliated with Cardano.

People who run the group have tried to sell the channel to Cardano. When Cardano refused to buy it, group members attacked Cardano in hopes that they’ll eventually change their mind and buy the channel.

Management didn’t care at the time when ranby the Cardano Foundation, under Michael Parsons.

Essentially the Cardano Community Telegram group is plagued with bad actors. Trolls who tell people who join the group that Cardano is bad and full of bad people.

Charles gave the last piece of advice for those who have issues updating to 1.4. He mentions that update issues may be due to a corrupted block database.  step is to delete and re-download a new one and also file a Help Desk report.