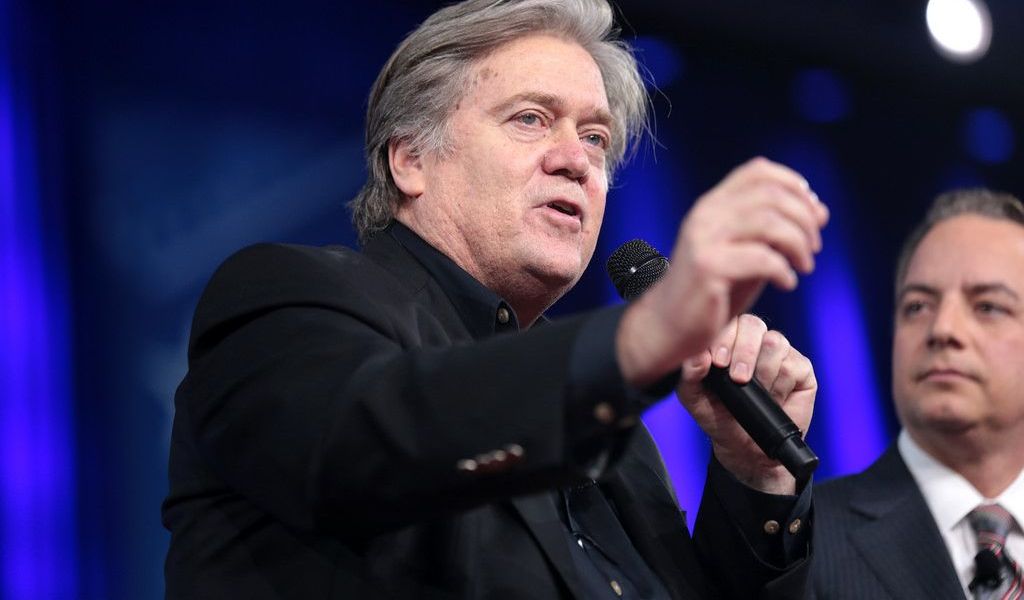 Steve Bannon, former chief-strategist of the Trump presidency and former editor of controversial ultra-right-wing news site ‘Breitbart News’, is making moves into cryptocurrency, it has emerged.

Steve Bannon, one of the most controversial figures of recent politics has expressed his interest in cryptocurrency and has plans to make significant moves into the space. Cited as one of the most instrumental figures in getting Donald Trump into the White House, Bannon apparently believes that cryptocurrencies can shake up the financial world in the same way Trump has shaken up politics.

Not much is known about Bannon’s exact plans, but the Wall Street Journal has reported he has met privately with crypto investors and hedge fund managers to discuss working on ICOs via his investment firm, Bannon & Company. Timothy Lewis, a hedge fund manager who has met with Bannon said of Bannon’s crypto knowledge, “he has clearly done his homework.”

Bannon has also stated he has “a good stake” in bitcoin.

Further to this he has apparently expressed his interest in helping entrepreneurs and even governments in creating their own cryptocurrency, tied to natural resources within their country; an Italian ‘marble coin’ might be one example of this. He has even floated the idea of a “Deplorables Coin” for the US – so named after Hillary Clinton’s use of the word to describe Donald Trump’s supporters.

Some commentators have expressed a lack of surprise at Bannon’s interest in cryptocurrencies; from the periphery, they potentially break old rules and challenge ingrained power structures in the same way Bannon’s politics have. Bannon also worked at Goldman Sachs in the 1980s, where he developed his knowledge of trading.

The significance of the monetary system is clearly central to Bannon’s political creed. Of his time working with the Trump campaign, he said,

“It was pretty obvious to me that unless you got somehow control over your currency, all these political movements were going to be beholden to who controlled the currency. Control of the currency is control of everything.”

However, Bannon’s controversial reputation means that his foray into crypto has not been greeted positively by everyone within the space; those who want to bring cryptocurrency out of the periphery and into the mainstream feel that association with Bannon will not help their cause.

“It almost seems like a natural progression for a man who gained prominence by shoveling out unfounded conspiracies to now be shilling complex technology and financial instruments to an unsophisticated investing public.”

Furthermore, details of a relationship between Bannon and most-recognisable-face-of-EOS, Brock Pierce have also emerged as Bannon and Pierce worked together at Pierce’s company IGE in 2005, which specialized in the virtual gold traded in Warcraft Games. Bannon credits his own move into so-called ‘alt-right politics’, with those he met through the company; disillusioned gamers who gathered online in chat rooms and later became core members of the ‘alt-right’ community. According to the New York Times, “Bannon would have gotten involved with cryptocurrency with Pierce in 2016 if the Trump campaign had not intervened.” Pierce himself has been cited as a similarly controversial figure, having been dogged by claims of child-sex offenses dating back to the 1990s – claims Pierce has denied.

Whatever your opinion on Bannon, he has proved himself a powerful voice when relegated to the periphery. Whilst he was quickly discredited and soon after fired by Donald Trump once Trump assumed the presidency, he was one of the most instrumental figures in propelling Trump from the fringe into the White House. Whilst cryptocurrency remains on the fringe, Bannon may be able to exact a similar kind of politics within the space. However, as crypto seems to be heading slowly but surely closer toward mainstream use, how much influence he can muster remains to be seen.