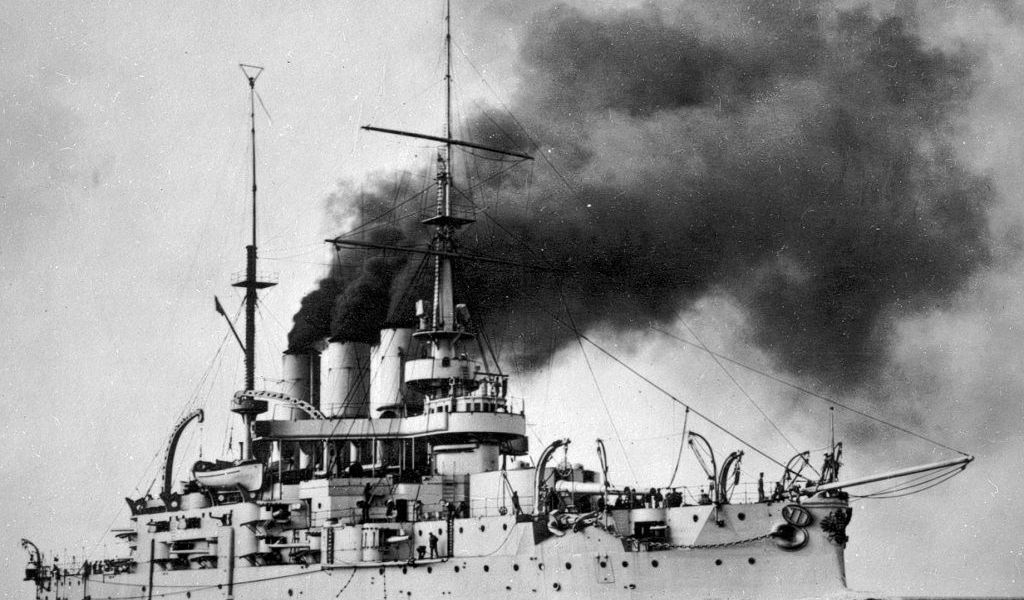 A somewhat bizarre story involving the supposed discovery of a century-old Russian warship in the Sea of Japan and what is increasingly looking like a cryptocurrency scam has been making the rounds lately.

More specifically, the South Korean treasure hunting company Shinil Group’s recently announced that they had successfully located the wreck of the Russian armored cruiser ”Dmitrii Donskoi”, which was scuttled after facing Japanese warships during the Battle of Tsushima in 1905.

Moreover, the wreck of the ship is said to contain the thousands of boxes of gold bars it supposedly carried at the time of its sinking, as well as 200 tons of gold coins.

Altogether, the shipwreck reportedly holds gold worth approximately $133 billion. In addition to this, half of the recovered amount will go to the Russian government.

Nevertheless, some have cast doubt on whether the ship even holds any gold – pointing out that it would have been far safer to deliver gold by land during the Russo-Japanese war.

If indeed true, this would represent an absolutely massive find – granted that Shinil Group can successfully salvage the precious cargo from the wreck. However, this is not the first time that the Dmitrii Donskoi has reportedly been discovered.

A now-defunct South Korean salvage company reported that they had found the wreck of the ship back in 2001, and South Korea’s Institute of Ocean Science and Technology similarity claims to have discovered the Dmitrii Donskoi in 2003.

This muddies the figurative waters when it comes to deciding which party possesses the salvage rights to the ship. Furthermore, a Russian military history official has also weighed in on the subject, claiming that maritime law dictates that the ship belongs to Russia.

Nonetheless, it would indeed seem as if the discovery of the Dmitrii Donskoi is at least accurate this time, as Shinil Group has shared an image from the stern of the ship, reportedly showing ”Dmitrii Donskoi” written in Cyrillic markings.

Pending regulatory approval for the salvage rights, Shinil Group intends to recover the gold from the ship later this year, with the help of an international consortium of companies from China, Canada, and the UK.

One is dubbed the ”Donskoi International Exchange” and promises to share profits stemming from the salvage of the Dmitrii Donskoi in the form of ”Shinil Gold Coins”. The other website reportedly promotes the upcoming ICO for the Shinil Gold Coin.

Although both websites have the same logos, graphical design, and claim to operate as a part of the Shinil Group it is nonetheless unclear whether this is actually the case. For one, the domain names do not belong to Shinil Group, and are instead listed as belonging to a Seoul-based shopping mall.

A representative for Shinil Group, Park Sung-jin, has also publicly stated that the Shinil Group is ”in no way” affiliated with the exchange, although he has not yet made a public comment on whether the ICO is legitimately related to Shinil Group.

Nonetheless, things undoubtedly look sketchy, and South Korea’s Financial Supervisory Services has issued a statement urging caution from investors, warning that they might ”suffer massive losses” if they rely on hearsay regarding the supposed recovery of the Dmitrii Donskoi.

Shinil Group has vowed to share more evidence regarding the discovery of the ship at a press conference next week; however investors should make sure to at least hold off until then on partaking in any ”Shinil-backed” ICO or other cryptocurrency venture supposedly tied to the company.

It remains to be seen whether this is a cryptocurrency scam or not, however, things are certainly not looking good for the validity of the Shinil Gold Coin. Nonetheless, we will watch how this story develops with great interest.