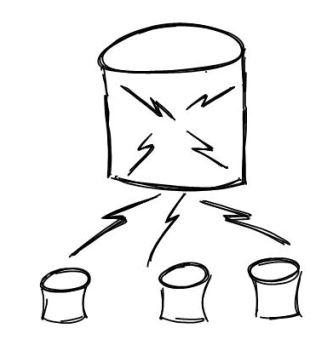 Are you curious about consensus algorithms and why they’re key to blockchain technology? Great! You’ve come to the right place. To learn blockchain development and be certified I recommend visiting Ivan on Tech Academy.

In my sixth and seventh ones, I’ve dove-deep into consensus algorithms. Finally, in my last release, I’ve looked into the blockchain trilemma. Thankfully, the previous issue perfectly links to what we’ll discuss today.

What is database sharding?

Database sharding is seen as one of the most prominent ways to scale blockchains and is currently being developed by projects such as Ethereum, Zilliqa or Polkadot.

A key argument from computer science is that you can’t scale a system without losing security, privacy (decentralisation), or both. This trilemma shows how complicated it is to properly distribute a system among independent peers who can join and leave the network as they please.  Communication between nodes, or network latency, could become incredibly slow given the fact nodes can choose to randomly disconnect at any point in time – without consequences. Network bandwidth plays a key role in the overall system’s performance, which can be a significant problem for many cryptocurrencies as most people in the world don’t possess enough resources to purchase large amounts of data.

Is there a way to address both the network latency and bandwidth problem?

Developers have proposed many solutions to address the issue of throughput on the protocol level. These solutions can be mostly separated into those that delegate all the computation to a small set of powerful nodes, and those that have each node in the network only doing a subset of the total amount of work. Database sharding, nowadays most commonly known simply as sharding, is a technique that allows nodes to process only small parts of the entire blockchain transactions. At the same time, it makes sure the state of the whole chain is correctly ordered and validated. Sharding creates multiple smaller databases that only store local copies of transactions. Each database validates and stores a small part, making the system lighter as a whole.

Database sharding has a simple goal: to allow blockchains to scale. To fully understand the different properties and features, I must explain what the role of nodes are.

Each of these three tasks imposes a growing requirement on the nodes operating the network. Essentially, common storage and relay problems are prone to arise in public and open blockchains:

Under State Sharding, the nodes in each shard build their own blockchain and contain transactions that affect only the local part assigned to that shard. The validators only need to relay transactions that affect their part of the state. This partition linearly reduces the requirement on all compute power, storage, and network bandwidth. However, it introduces new problems such as data availability and cross-shard transactions.

An overview of different Sharding versions

To fully understand sharding, I must explain the different types of sharding being developed. While one is focused in scalability, the other is concentrated on cross-communication. These are the two major versions of sharding being used:

Each type of database sharding has its own benefits and drawbacks, described in the table below.

Database sharding is a technique that separates a single blockchain into multiple smaller blockchains (or shards). Each shard runs independently and processes its own transactions. Improvements upon how sharding works are being tested, such as cross-sharding, which allows shards to communicate in-between themselves. Some of the key benefits of sharding are the reduction of the overall blockchain size and the possibility for a quadratic network performance enhancement.